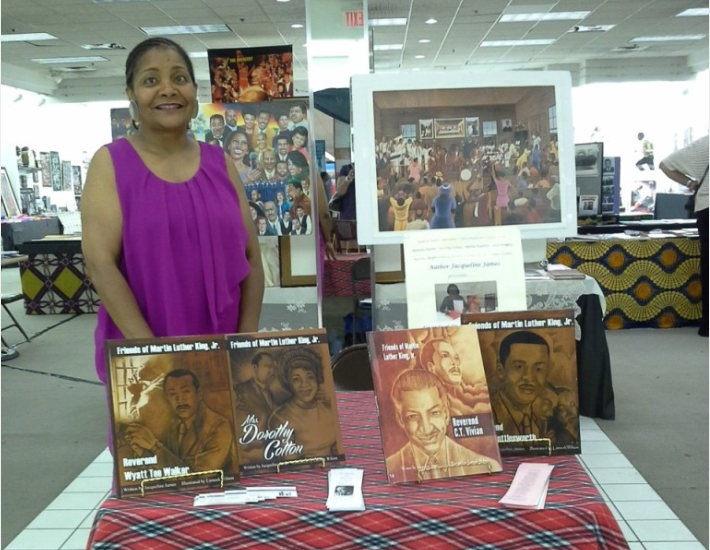 WASHINGTON (NNPA) – Over the course of a 32-year teaching career, Jacqueline James noticed a glaring problem— Black History was slowly but surely being ignored in  the schools where she worked. When it was outright dropped from her required  curricula, she got creative, using Black history calendar factoids for penmanship  lessons.

“Now, Black history is watered down to them teaching about [Martin Luther King, Jr.] in  January, then they don’t even do anything else,” says James, adding that teachers  today are under so much pressure, they don’t have time to truly teach.“Even now…I really think children need to know who helped him. Because they think  Martin Luther King did everything from free the slaves to help Lebron James. It’s crazy.”

The sepia-toned hardcovers feature key players in the Civil Rights Movement who  supported and worked with Dr. King. They are written at a middle school level, and each book has accompanying lesson plans and enrichment activities for teachers. James’ lesson plans are also in line with the Department of Education’s Common Core educational standards, which have been adopted by almost every state.

And she’s enriching her own life, too. Through her company, JAX Publications, James is able to avoid the steep percentage cuts of being carried in a bookstore, which typically takes 40 percent, or working with a publisher who might want to own the rights to her work.

But more importantly, the project allows the self professed “historical-accuracy fanatic” to get up-close and personal with the figures she so admires. Take C. T. Vivian, the subject of the first book in the series, for example.

“When I was 17…I saw this man standing, talking to this White racist sheriff. He wouldn’t stop talking, and the [sheriff] hit him and knocked him down. And then he got right back up and kept talking. They picked him up and took him to jail,” she remembers.

“Then I saw the same scene years later on [PBS documentary] Eyes on the Prize, and I said, ‘That’s the same man from those years ago!’”

Forty years after that, James was a guest at an event to commemorate the 40th anniversary of the Selma-to-Montgomery, Ala. march and Rev. Vivian was also in attendance.

“And I went and introduced myself, saying, ‘You don’t know me but I’ve known you for years. I’m glad to meet you now,’” she says. “We shook hands and talked, and I said, ‘Somebody needs to write a book about you….’ And he said, ‘Well, here’s my number. Call me when you get back to Atlanta and we’ll sit down and talk about it.’”

Since then, she’s become acquainted with other civil rights luminaries such as Dorothy Cotton, Rev. Fred Shuttlesworth, and many more (even becoming good friends with the latter’s daughter, Ruby Shuttlesworth Bester).

“You only hear about Martin Luther King in Birmingham, you don’t know about what this man [Shuttlesworth] did eight-nine years before that. Just talking to him—” she says, expressing how excited she was to get to know him. “And then the next year he was saying, ‘You know I’ve got a brain tumor, right?’ And I said, ‘What do you mean, brain tumor?” And he goes, “Well that’s from all those White people beating up on my head for all those years.’”

A few months after that conversation, Shuttlesworth began having strokes. And a few years after that, his wife called to ask James to rush-deliver his book in the series. A few hours after reading the un-illustrated, unpublished manuscript, Shuttlesworth died at home.

“They had a chance to read it together and that just meant so much to me,” James says. “He couldn’t speak by then, but [his wife] said she could tell he was really pleased.”

James says that if she hadn’t been the kind of voracious reader who has read the newspaper cover-to-cover since grade school, she might have never known about these key figures. In fact, when she first met Shuttlesworth at an awards ceremony, she had no knowledge of who he was or the contributions he had made until he gave his keynote address.

There was also the time a librarian friend had invited her to an author event featuring Richie Jean Sherrod Jackson, author of The House on the Side of the Road: The Selma Civil Rights Movement. Unbeknownst to James at the time, the home of Jackson and her husband, Dr. Sullivan Jackson, served as the safe house and headquarters for all civil rights activity in Selma, Ala. President Lyndon B. Johnson was even known to call there looking for Dr. King and others.

The more James learned as she taught, the more she realized how little Black history was being shared across generations. For example, she recalls learning that Dr. King’s “Letter from Birmingham Jail” had been written on smuggled scraps of paper over time, and that his friend Wyatt T. Walker not only reassembled it later, but had also smuggled in the camera that captured the iconic photos of his imprisonment.

Even in her own childhood, James, now 66, remembers not knowing much about the history taking place around her.

“Our parents didn’t talk about it,” she recalls. “I remember hearing Rosa Parks’ name, and not riding the bus, but I was nine then. And I vaguely remember the dogs on those children in Birmingham. But everything else I found out because of my own nosy self.”

Today, the Friends of Martin Luther King, Jr. series consists of 28 titles, including  A. Philip Randolph, Bayard Rustin, Dorothy Height, and more. Her books can be found in Georgia’s DeKalb County Library system; in a few schools in Michigan, DeKalb County, Atlanta, and Durham, N.C. and can also be purchased directly from her website, www.jaxpublications.com. In addition to adding to the series, she’s also seeking financial partners to launch a children’s magazine, and dipping her toes in publishing other like-minded authors’ works.

“When I ask students, do you know any of [Dr. King’s] friends…one student told me, ‘I didn’t know he had friends.’ What was sad was when another student asked me, ‘Was Harriet Tubman his friend?’

Your shopping cart is empty.

The books are a valuable resource for teaching American History to students!

The books and activities are aligned with our State's Standards and Common Core!

Reading this book series has been a blessing. Jacqueline James has conducted research and interviewed 100's of individuals in order to give students, teachers and  parents an inspirational summary of the roles Dr. Martin Luther King Jr.'s friends played in his rise to prominence. As an educator and activist, I found myself buried in each book and could not put them down.

Author of Masterminds of Mentoring and Human Motivation